>Churros from Spain for this TGIF feeling!

>If the children happen to be on holiday on a Friday, I often take them to Portobello Market in the morning to have a browse around the clothes stalls, grab some cool T-shirts from Pinky Fish and get a plateful of “churros con chocolate” at Cafe Garcia, next to the supermarket of the same name. It is our treat and our pleasure to dip the fat Churros into a thick Spanish chocolate while sharing a few thoughts.

For the week-end, I give you the true Churros recipe from the bible of Spanish cooking by Simone and Ines Ortega “1080 Recipes”. 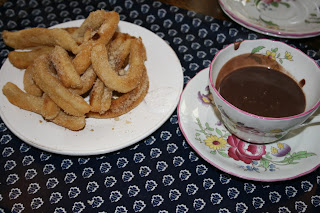 I tried it together with Hugh Fearnley-Whittingshall’s one in last week-end’s Guardian and I am afraid it won hands down for authenticity and speed – They were on par for taste with Hugh’s one being heaviest.

Boil the water in a large saucepan.
Add a pinch of salt and the flour all in one go- do not worry about lumps!
Mix briskly with a wooden spoon until the batter gathers up and pulls away from the sides.
Take it off the hob and leave to cool.
Heat the oil in a wok or a chip pan.
Using a piping bag with the fattest possible opening, fill and squeeze the cooled dough out.
Make long fat Churros and cut them up as they come out to chuck into the oil.
Fry until golden.
Take out on some kitchen towel then dust with the sugar flavoured with a pinch of cinnamon.
Serve hot for breakfast with a cup of thick chocolate. This is Seville street breakfast at its best!

This is so easy I wonder why I never tried it before… But I will still take the kids out for it because it is really a street and café food and I love the buzz of the market.