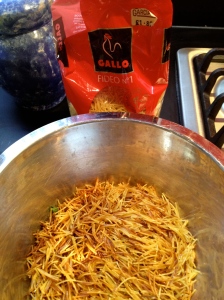 Today I am revisiting an ingredient used last year as Black Vermicelli and this time I use the normal version, available at Spanish delis or specialised gourmet shops . It is worth hunting for because it produces a super dish in minutes. The French mostly put “fideo” in soups but the Spanish use it to do a quick and tasty version of the ubiquitous paella. Choose the Fideo number one for the thinner quality.

Start by toasting the fideo in a shallow frying pan with a bit of olive oil. If you can, use a pan that can also go into the oven. When the Fideo turns brown, reserve in a bowl.

Make a Spanish “sofrito” with the onion, garlic and parsley all chopped up. Fry it in the same pan.

Add the tomatoes chopped up, the courgette, mushrooms and paprika, cumin and a pinch of saffron. Cook and move about a little until the mix soften and add enough tomatoes to make a thick sauce – you can use a half tin of chopped tomatoes if easier! No harm in cutting corners, is there?!

Add the noodles  underneath the veg if you can, by pulling them up with a spatula.

Pour the warm stock in. Allow to cook on slowly until all the liquid is absorbed – do not cover. It will take less than 15/20 min. A few minutes before the end, you can add a few frozen prawns or mussels to jazz it up but you really don’t have to.

Just before serving – if your pan allows- put the dish under the grill and get a crispy top in 4/5 minutes. Serve with lemon wedges and a sprinkling of fresh parsley.

This is a delicious last minute dish! Most of it is pulled out of a cupboard or freezer. But with the addition of a few fresh vegetables, you can produce a very healthy lunch. Customise according to what you have and it is great every time… The version on the picture  above had butter beans, red peppers and aubergines, for example.

Fideo is very popular around Alicante and gets used in all sorts of wonderfully tasty variations: Once the basics are there, nothing should stop you improvising. Having fun in the kitchen is a great reason to cook! Maybe the only one…