I am very excited about sharing this recipe! Maybe it is its simplicity, or its taste combination, or maybe it is the fact we are approaching Easter but I feel really excited about posting this…

It was in a cold train station, very early one morning, that I tasted this dish and was instantly hooked! This little cream pot with a soft runny egg in the middle revived memories of the ham and egg “oeuf cocotte” I used to be served as a child – a comforting, protein-packed and tasty starter…

If you don’t want to splash on truffle oil or truffle paste, you can just replace it with chopped ham and a pinch of sweet paprika. Both versions work just as well but I had bought Truffle oil and Truffle paste from //platform.twitter.com/widgets.js” target=”_blank”>Tartufaia Truffles  in Borough Market as a Christmas treat and a dash of both elevated a simple family dish to new heights of deliciousness!!! I prefer using duck eggs for this because there is more of it and they cook slower than hen ones so you are less likely to overdo them ; but any egg will do – just adjust the cooking time to the size.

Take an oven-proof small dish like a “ramequins” or dariole mould and put a large dollop of crême fraîche in it. Push the curved side of your spoon in to create a dip. Crack your duck egg inside the dip. Dribble some truffle oil and add some truffle shavings (or use some Tartuffaia truffle paste if you can). Truffles are an expensive treat but you only need a little oil or paste to release the most powerful aroma so it is worth making the effort.

Steam in an electric steamer or in a pan with a little water for under 10 minutes. Stop the cooking as soon as the yolk start to set. The white will set before the yolk does and so the result is a soft boiled egg in a dish!

Serve boiling hot with a small pinch of sea salt. Add some buttered “soldiers” on the side! This is regressive and blissful cooking…

For the ham and paprika version: Just chop some cooked ham over the cream and add a pinch of smoked paprika on the egg. Success is guaranteed! 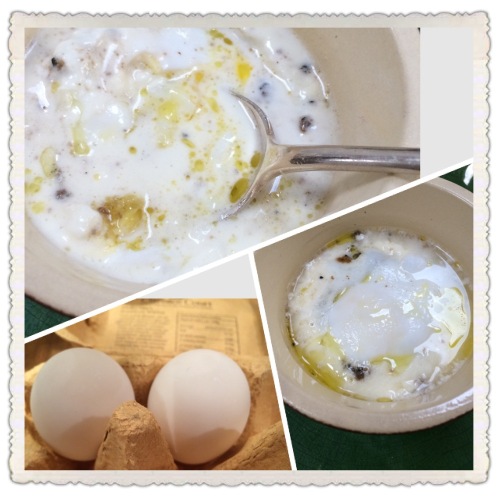