This lovely cookie I found on allrecipes.com. I was looking for a nice way to use my Libby jar of pumpkin purée and I really enjoyed the melting fudge-like texture of the dough  and the mixed spices.

Preheat the oven to 175 degrees.

Cream the butter and icing sugar. Add the flour and spices mix.

Drop ball shaped portions of the dough on greaseproof paper and reserve in the fridge for 30 min if possible – it will help them retain their shape.

Bake for 15 to 20 min then let them cool and drizzle some icing over them (icing sugar mixed with a few drops of lemon) or just dust in icing sugar.

If you do not have pumpkin puree, you can replace with unsweetened chestnut puree. The nice spicy edge of this cookie is made even nicer by the fact is is not over sweet.  The icing sugar does also improve the texture and makes the dough very fudgy and melting.

Enjoy those cookies with a nice cup of tea. That is my favourite British expression: not just any cup of tea but a “nice cup of tea”! Cures all ills – might even work on my nasty cold…

Seeds are not just for birds (as my eldest keeps complaining…), they are also a very good healing food and can be used very successfully in baking. To breads, cookies or even fruit cakes, they give a deliciously healthy dimension.

These seeds cookies are adapted from the recipes of a lovely Jersey restaurant “The Jersey Pottery”; taken from the book Handmade and homemade, recipes from Jersey by Jersey pottery. I made my version gluten-free and I added xantham gum for extra binding but you can use normal wheat flour if you prefer.

This mix makes about 15 biscuits.

I used pumpkin butter instead of pumpkin seeds because I had ran out and I swapped part of the sesame seeds for japanese black sesame seeds because I like the dark speckles in these biscuits. I also used gluten-free flour but you don’t have too. If you do though, add a spoonful of Xantham gum and that worked really well to bind the mix. The texture was dense but flaky and had a nice crumbly feel in the mouth, a little bit like a spanish ‘polverone’ which I found intensely pleasurable. The taste is nutty and subtle – not too sweet. They would go very well with ‘grown-up’ teas such as a smoky Lapsang Souchong or the neroli flavoured Earl Grey sold by The East India Company.

First sift the flours and spices together.

Combine the butter, sugar and egg to make a paste.

Then bring all the ingredients together to produce a cookie dough.

Dust the worktop with flour and roll the dough until you get a nice thick log.

Wrap it in cling film and let it harden in the fridge for a few hours.

Warm your oven and cut the log in thick disks, then lay them out onto a grease-proof sheet. You can also freeze part of it for later…

Bake at 170° for 15 to 20 minutes or until the bottom bit gets  slightly brown. These biscuits hold quite well through baking so you don’t need to space them out too much as they will keep their shape. You can even use a cookie stamp to personalise them!

Linseeds or flaxseeds are a good source of vitamin B6, iron and Thiamin. Thiamin (or vitamin B1) is essential for your nervous system.

Pine nuts, like all other seeds and nuts, bring you a lot of Omega-3 and Omega-6 fatty acids and help look after your skin, eyes and joints. They are also great at regulating moods and at helping children concentrate.

>I made these recently for a smart dinner and served the buttery biscuits with a simple vanilla ice cream and some brownies. 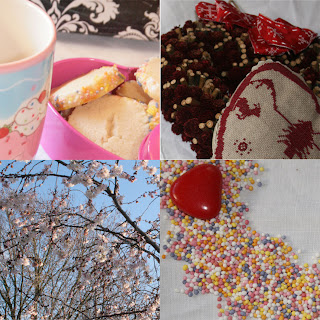 In a medium mixing bowl, beat the butter with a spatula.
Add the sugar and salt and mix them in thoroughly until the mix is fluffly and creamy.
Split the vanilla bean(s) length-wise and collect the seeds by scraping the insides of the bean with a blade. Stir the seeds into the mixture. (Save the empty pods for another use : to make vanilla sugar or vanilla oil; to infuse in milk, yogurt etc.)
Add the flour and rub it into the butter mixture with the tips of your fingers.
At that stage, you can use a food processor if you like!

Gather the dough into a ball without kneading.
Divide into 4 pieces and roll each piece into a log, about 3 cm (1 1/4 inches) in diameter.
Wrap the logs in plastic wrap or parchment paper, and place in the fridge to harden for at least 1 hour. (Alternatively, you can freeze all or part of the logs to bake later; thaw partially at room temperature for about 1 hour before proceeding with the rest of the recipe.)
Preheat the oven to 150°C (300°C) and line a baking sheet with a silicone baking mat or a sheet of parchment paper.
Remove the logs from the fridge.
Beat the egg yolk, if using, with a few drops of water to thin it out.
Working with each log in turn, use a pastry brush to coat the log with egg yolk or milk on all sides, then sprinkle with coarse sugar until coated all over.
Use a sharp knife to slice the logs into rounds, about 1 cm (1/3 inch) in thickness.
Arrange the slices on the prepared baking sheet, leaving just a little space around the sables – they won’t expand much.
Bake for 30 minutes, until the dough is set in the center. The cookies will barely color.
Let them rest on the baking sheet for 5 minutes before transferring to a rack to cool completely.
Repeat with the remaining dough.

The sablés will keep for about a week in an airtight container at room temperature- but they will hardly need to!


Adapted from a recipe from Yves Camdeborde’s Dimanche en famille (Menu Fretin). Mr Camdeborde has the Relais de l’Odeon in Paris 6th and I have every intention to go and visit soon, fingers crossed!

Pottering around last week with the children -waiting for the school gates to reopen-, we tried a few new baking recipes and this one was a definite winner: a crumbly and melting cooky that kept its shape and was lovely for dunking in a hot cup of tea as well! The cakes above were made by my youngest, aged 11 and a bit.

This recipe was borrowed from a Dorking Kindersley book I bought ages ago “The baking book” by Jane Bull. The step by step illustrations are really easy for kids to follow on their own and the recipes delicious enough to satisfy fussy adults too.

Put all the ingredients into the bowl (except the chocolate) and rub the mixture between your thumbs until it looks crumbly. If you are putting in the chocolate chips, break them up now (we use a parmesan knife for this) and put them in. Now squeeze the mixture together to make a ball. Pinch off some and roll golf size balls into your hands. My tip here is to put these balls on a plate and into the fridge for 1/2 hour or so: this really helps cookies to hold their shape and it is true of these biscuits too.

Place the cold balls onto a baking sheet, leaving plenty of room around each and flatten them with your palm or a fork if you want a pattern.

We made plenty and they kept very well in a metal biscuit tin. We loved them so much and they were so easy to make that I don’t think we’ll be buying the shop variety ever again – at least, so long as my youngest son continues to turn out regular batches of these!

After eating these, we went up to climb the 311 steps to the top of Monument – something not many Londoners have done- and were rewarded by the view and a certificate stating the feat! The Monument, eponymous to the tube station, was built in 1671-77 by Sir Christopher Wren and Dr Robert Hooke to commemorate the Great Fire of London of 1666. Its height is the exact distance from the fire’s start in a baker’s shop in nearby Pudding Lane. I bet you didn’t know that! Me neither…

I am not very good with height, I feel dizzy on escalators and I assure you the 50 metres climb was very high indeed but the real achievement was in going down the narrow winding steps… It felt like a spinning carousel and I landed with relief, but shoeless! -You did not expect me to do this in my 9 inches heels, did you?!

Cookies, better than a roll in the hay?! You decide!
Today I made the scrummiest cookies: a hint of cinnamon, a triple dose of ginger and some juicy raisins to counter the heat of the spices. I borrow the ABC of this recipe from Dan Lepard at the Guardian weekend : One of the best newspapers food column, in my humble opinion.
I put them in a bright red box from the Mastiha (M-A-S-T-i-C-A) shop in Athens, ready for my next
coffee morning where obviously they’ll be needed next to a good cuppa to open hearts and loosen tongues… unless of course they have already gone by then! And so another batch will be in order…
When I haven’t scheduled one for a while, I miss our “mums’ chat” around the kitchen table, in front of a steaming black coffee, dipping into the cookies’ jar and having a healthy moan about “the kids”, the love of our life -and does he still feel this?!- or our last encounter with a desperate parking attendant. We eat and we giggle ; share cookies and stories – which we will all admit, in the current climate, is way better fun than a roll in the hay!

In a food processor ( why not indulge when you can?), beat the diced butter and the brown sugar until smooth. Then beat in the egg until evenly mixed. Chop the crystallised stem ginger into slivers and stir in with the coconut. Sift together the flour, ground ginger, allspice and cinnamon. Stir into the mix on low speed if you can, then fold in the raisins.

With a spoon, divide the dough into walnut size balls and put on a tray lined with baking paper. Leave a good space around each ball so they won’t run into each other. Put the tray in the fridge for a bit. I find this is the best tip to get perfectly shaped round cookies that don’t invade each other’s space!

Preheat the oven to 170°C and bake for 15 min. Leave to cool onto a wire rack, then transfer into you favourite biscuit box and call your best friend over for a coffee!

Health notes: the point of homemade cookies is that most shop-bought ones sadly include hydrogenated fat or palm oil. Both coat the inside of your arteries and are pretty bad news. So why don’t manufacturers have the obligation to disclose their use on the label?! More on this soon…