>A great way to cook salmon and get those famous Omegas into the kids! Plus it is super quick.

Ingredients list:
One salmon fillet (with skin on)
For the marinade :
Teryaki sauce 2 Tbsp

Cut your side of salmon into the required number of strips – or get the fishmonger to do it but without peeling off the skin.
Mix all the sauces into small bowl. Be creative: try other mixes.
Then lay the clean salmon fillet into a shallow dish and pour the marinade over.
Turn them around to coat well and leave aside for a few minutes.
Heat a hot griddle or a thick bottom pan on the hob.
Sear each fillet, skin down, for a few minutes.
Lower the heat and cook for 5 to 8 minutes on that side. The skin should burn to a lovely crispy black layer, with that rich barbecued smell that reminds me of summer !
Turn them on each side, right and left, for a few seconds to make sure they are cooked but make sure they are only lightly cooked inside and remain moist and pale pink.

Serve immediately with beans – even baked beans work really well!- or better: my Mung beans and lentils dahl from yesterday. That’s a real jumble of flavours (Japanese and Indian) there, but it works great.

Do not get worried by the exotic sounding sauces: most are now readily available in the UK and in any case you can adapt and play around with this recipe- try other exotic mix if you like and include other fruity syrupy ones. I love the dark pomegranate treacle I buy from Iranian or Turkish shops here but tamarind or quince extract would work as well. It just adds the right sweetness to balance the saltiness of the soya based sauces. 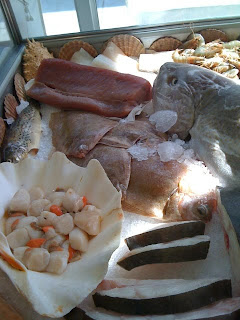 Japanese flavours are a great fall-back position when you want health without giving up taste!

Here is a favourite I found at Feng Sushi, one of my favourite take-away places in London:

Boil for 6 minutes 150 g of green tea Soba noodles and 150 g of Soba (buckweat based pasta). Rinse in cold water quickly and reserve. Soak the wakame as advised on the packet.

Mix in a food processor the wakame, garlic, pickled ginger, tofu, soy sauce and dashi or bouillon powder. Pour this sauce over the pasta, decorate with the shredded spring onions and the coriander.
Serve immediately as a side dish with sushis or simply smoked salmon.

Nutrition note:
Sushis and fatty smoked fish are a great way of keeping you zinc levels up when you are detoxing or simply restricting the calories. It is important though to always have extra C vitamin with smoked fish to counter the chemicals used in smoking, so do not forget to squeeze a lemon over it! This makes the fat more digestible too, in salmon and sardines for example, but these contains good and important fatty acids so do not skimp – your brain and joints will thank you for it!

You must have guessed by now that I am very fond of Japanese cuisine, despite having never been to Japan! I do enjoy the clean and fresh taste of Japanese food and the care that goes in the presentation of each dish. I first discovered it at the Japan Centre in Paris when I was a student and I always go back to it whenever I feel like healthy, lean, recipes that taste good and look good.

Wash and cut the vegetables. Boil the noodles for 6 min in salted water and rinse quickly under the tap. Toss the drained noodles in a large shallow dish and chuck the vegetables on top. Dress with a sauce made of one part soya sauce, one part olive oil, a dash of oyster sauce or fish sauce and some chopped sundried tomatoes.

This is not very typically japanese at all but inspired by many similar salads that are served around in London. I like it because it looks good and the ingredients are very easily available in the “West” without having to go all the way to Regents street or Chinatown- though I do love making the trip when I can! Udon noodles are thin wheat noodles similar in shape to Soba noodles but of a lighter colour.

NB: Utensils are crucial and having the right ones is certainly paramount in order to succeed with Japanese recipes: I use a steel mandoline to cut up my vegetables and I recommend purchasing one before attempting anything! Once hooked you’ll be using it for all your veg and salads…

I first tasted these exotic delicacies when I was invited to the launch of their recipe book by Enfants du Mekong, a charity dedicated to setting up sponsoring for disadvantaged children in Laos and other South East asian countries. Their  new recipe book are a collection of best-of by sponsor-families in France and the UK and is fast becoming a favorite in our kitchen!

I served these madelaines last week-end to my globe-trotting parents with a cup of green tea and some raspberry and green tea muffins… Not quite the English tea-time they no doubt expected but a brilliantly exotic take on that and very much loved too.

Preheat the oven at 180℃.
Whisk the butter and sugar together until light and fluffy.
Add the eggs one at a time then the flour, a pinch of salt and the matcha tea powder. I found mine at the Japanese Center in London (Lower Regents street).
Spoon the mixture into madelaines or any small pans tray and bake at 180℃ for 18 minutes.

Serve with a cup of very good green tea for an unusual and subtle taste experience! 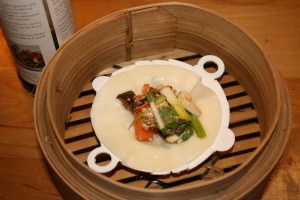 My love affair with Japanese food started when I was a student in Paris, going to Japanese language evening classes after the Sorbonne and popping into Ozu films afterwards with a long-haired philosophy student who shared a love of Spinoza… Then, I learned how to deftly roll out sushis or fry tempura but today I am experimenting with pasta. The very same type of pasta early italian explorers like Marco Polo might have brought back in their luggage !

Ingredients list:
2 tbsp japanese soy sauce
pinch of white pepper
1 tbsp of mirin (sweet japanese vinegar)
1 egg
2tbsp sesame oil
Finely shredded cabbage (a big handful)
3 or 4 shiitake mushrooms (soaked in hot water)
A few shredded spring onions
Minced pork 150 g (optional)
A few drops of oyster sauce
A packet of gyoza wrappers
All of the ingredients can in found in the Japanese Centre in Regent Street, London. This is also where I found a cunning spring onion shredder that I now use all the time and the lovely raviolis press featured in my photo! It makes the whole job so much more enjoyable- but you can press the raviolis by hand with a fork just as easily.
Mix the shredded vegetables, the seasoning and the pork in a bowl then refrigerate for 1/2 hour. You can decide to forget the pork and do a vegetable version as in the photo above.
Take a wrapper and put a little mix in the middle. Wet the edge with a pastry brush then close one half over the other and press to stick between your fingers.
Store them on an oiled plate as you make them. Do not overfill or they won’t look good!
Then put some rapeseed oil in a cast iron pan and drop the raviolis one by one when the oil is hot. Quickly fry both side. When you have a good batch of them in and looking golden, with almost no oil left, pour a small glass of water in the pan, put the lid on and let it stem for 3 or 4 minutes. Serve hot with some stir-fried cabbage and soya shoots and a dash of tamari (japanese sweet soya sauce) or oyster sauce.
This went down particularly well with hungry children tonight – and they did not even notice the vegetable content!
PS. There is an Ozu film festival at the BFI South Bank this week! I’ll try not to miss it…